With the devastating coronavirus outbreak showing no sign of relenting, global stock markets tumbled into bear market territory before a vicious double-digit relief bounce to close the week. For the Global X Robotics & Artificial Intelligence ETF (BOTZ), its bear market actually started in 2018 when BOTZ stumbled back to earth from its 80+% meteoric rise in the preceding year: 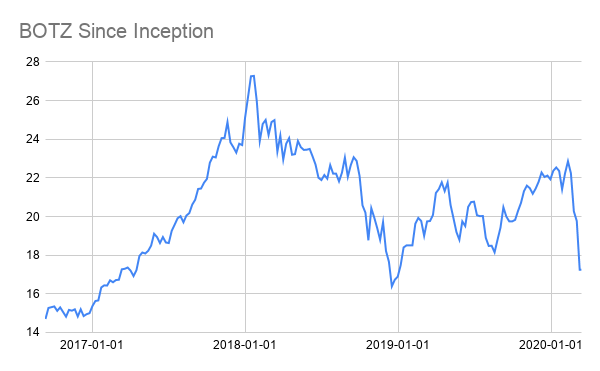 Prior to the market turmoil, BOTZ had struggled to retrace towards its all-time high, even as the broader technology sector ETF (XLK) and S&P 500 (SPY) continued to make fresh record highs. After the most recent meltdown, BOTZ is now up only around 17% from its inception price, which is a far cry from the nearly 80% gain in XLK. 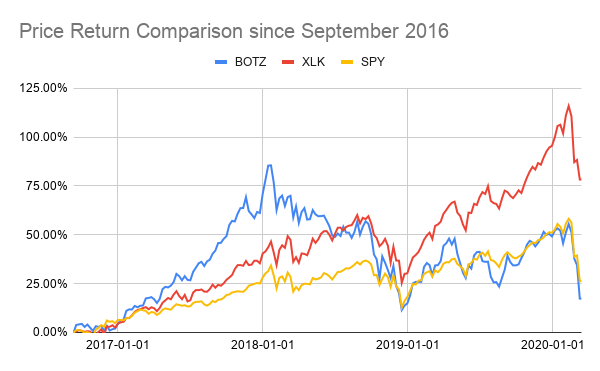 Fundamentally, while BOTZ may seem like an ideal investment considering the fact that robotics and artificial intelligence increasingly have become an ubiquitous part of our daily lives, the underlying holdings’ earnings picture suggests otherwise. Specifically, we observe that the growth in earnings before tax (EBT) of the top 15 holdings has not only tailed off but actually turned negative in 2019:

As shown above, most of the top 15 holdings had enjoyed solid earnings growth between 2015-2018 but came to a halt last year. As a result, the price-to-earnings ratio remains at unattractive levels even after the most recent stock market crash. Below chart shows the P/E ratios of the top 5 names as well as the weighted average P/E of the top 15 holdings: 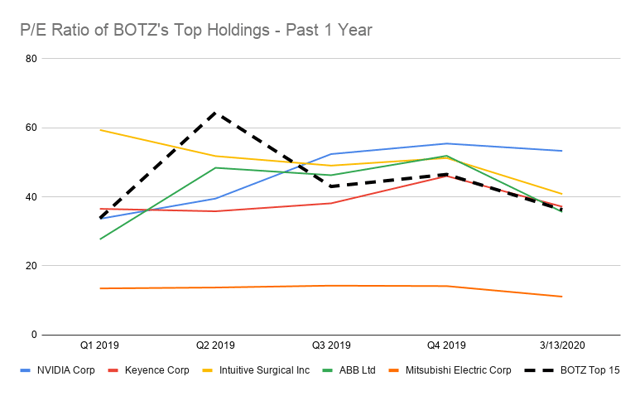 To put BOTZ’s weighted average P/E north of 30 in context, below we compare BOTZ’s valuation metrics vs. key ETFs. As shown, BOTZ is substantially more expensive than the broader technology sector, semiconductors as well as the flagship indices of S&P 500 and Nasdaq 100.

Furthermore, BOTZ’s return on equity is also rather mediocre comparing to its peers at around 16%. Indeed, BOTZ’s ROE has been dragged down by a significant drop-off in NVDA’s ROE last year as well as the subpar profitability of its Japanese holdings (~10% ROE) :

Heavy Exposure to Japan Will Continue Dragging Down BOTZ

Another reason for BOTZ’s dismal performance the past few years is due to its concentration in Japanese stocks. In fact, the 42% exposure to Japan is the BOTZ’s top allocation by country, with the U.S. being second at 36%.

Not only has the Japanese stock market continued to be plagued by a fragile domestic economy and uncertainties surrounding Tokyo Olympics, persistent foreign outflows have piled on additional downward pressure on Japanese stocks as well. 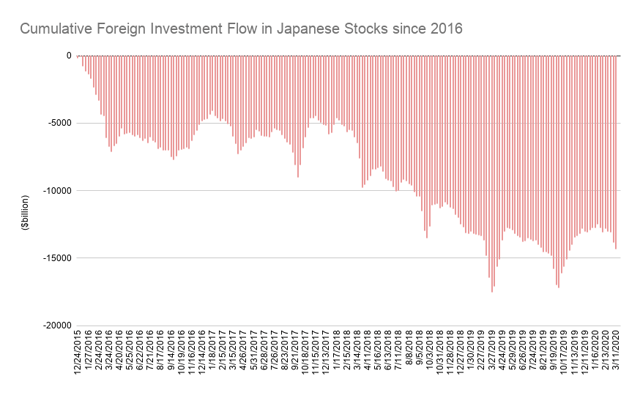 Hence, we expect BOTZ’s substantial Japanese exposure to remain stagnant against the backdrop of gloomy fundamentals and sentiment in the Japan economy and stock market.

To sum up, while long-term growth prospect on the technology sector remains bright in our opinion, we anticipate BOTZ to remain stuck within its long-term consolidation due to unfavorable earnings growth and geographical allocation. On that note, we reckon XLK and/or SMH would be more compelling alternatives to buy for the long haul.

Disclosure: I/we have no positions in any stocks mentioned, and no plans to initiate any positions within the next 72 hours. I wrote this article myself, and it expresses my own opinions. I am not receiving compensation for it (other than from Seeking Alpha). I have no business relationship with any company whose stock is mentioned in this article.