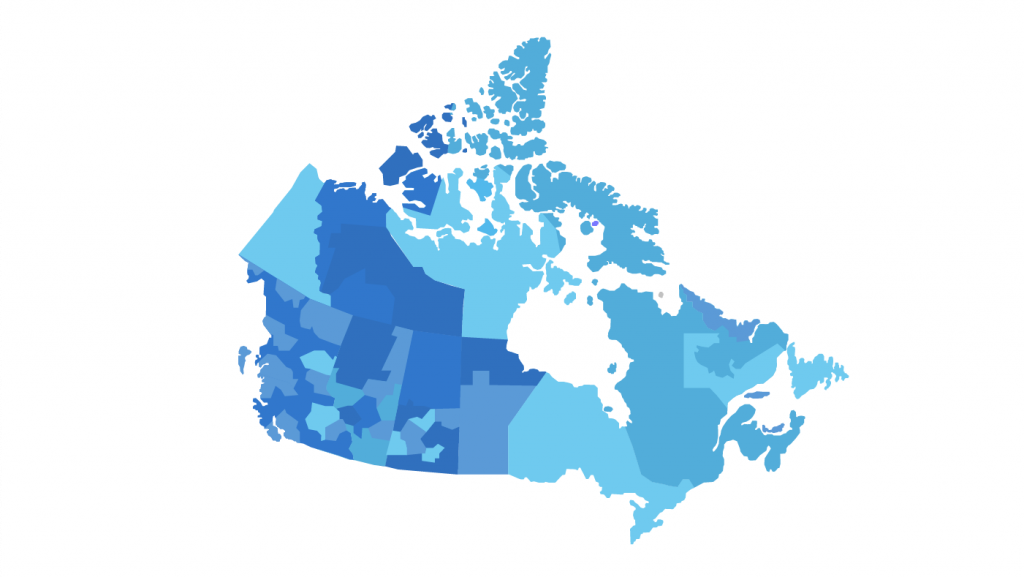 A lot can be learned from better understanding the kinds of work people are looking for via internet search, which can indicate what jobs individuals believe are attainable and what jobs they’re willing or want to work. Given that 80 percent of job seekers turn to the internet for information and resources, online search queries can provide a wealth of information. This interactive tool, as well as the one we created for United States search trends, showcases the novelty of internet search data while providing insight to other economists and researchers, policymakers, and educational institutions. Such insight can help inform economic policy and more effective job awareness, training, and reemployment efforts in times of economic change—the loss of a job, the shuttering of a company, the need for different skills as new industries replace older ones.

How does it work?

The tool used a system that identifies searches for jobs from among anonymous Bing search queries and then categorizes them into one of 14 employment sectors, ranging from architecture and art to technology and transportation. This classification process used a set of dictionaries that assigns search queries to a specific employment category based on keywords. Approximately half of all job searches are able to be categorized into an employment sector.

These keyword dictionaries emerged from the earlier work on classifying U.S. job search queries, which used a multistage process: First, a simple text filter for words like “job” and “career” was used to identify candidate queries. Next, each unigram in every candidate query was transformed into a word embeddings representation using Word2Vec. These word embeddings were then used in a support vector machine (SVM) model trained against a mapping of job titles to employment categories—for example, “nurse” to “healthcare”—that aligned with the categories used by the U.S. Bureau of Labor Statistics, which are the same as those used in Canada. The word embedding model was able to learn related keywords that belonged to the same employment sector, such as “RN” and “nurse,” and thus helped us expand and finalize the keyword dictionaries. 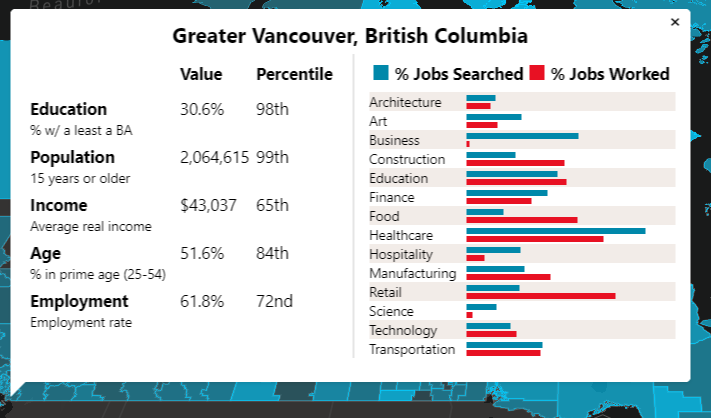 A summary of Greater Vancouver from the interactive tool reflecting Canadian online job search trends shows demographics and jobs searched and worked in 2017. Hovering over bars in the chart shows exact percentages.

For the Canadian data, which was sampled across the entirety of 2017 and included only English-language queries, searches categorized by the keyword dictionaries were aggregated over time and within each census division. The resulting summaries, which are revealed by clicking on a specific division, are presented as percentiles across the job categories. In Greater Vancouver, for example, 3.1 percent of categorized job searches were in architecture while 5.8 percent were in art. The tool also provides comparisons along demographic dimensions, so users can compare the types of jobs people search for based on education, income levels, population, age, and employment.

The Bank of Canada team is considering adding 2018 and even available 2019 data to further understand current trends. In principle, the job search signals generated with the tool could be updated daily to take a near real-time pulse of job searching in Canada.

In building the Canadian version of the tool, a number of differences between the U.S. and Canada emerged. Most notably, the variance in searches across job categories in different geographic regions appears to be higher in Canada. This is reflected in the generally stronger comparisons of job search categories across demographic variables. For instance, when segmenting Canadian census divisions by population, many job categories show significant differences between higher and lower population level divisions. Larger population census divisions in Canada saw almost twice the percent of finance job searches as their lower population counterpart, for example. In the U.S., larger and smaller population counties see nearly the same percent of finance job searches.

For more information, visit the Bank of Canada Staff Analytical Note about the project. In the note, Bank of Canada economists highlight interesting comparisons and alignments with demographic factors in the Canadian data. For instance, the percent of searches for business, science, and technology jobs increases along with the education level in a given census division while a higher percentage of searches for education jobs is associated with a higher proportion of prime-age population.

Our collaboration with Bank of Canada is an extension of the work we began with our exploration of job-seeker behavior in the United States, which involved more than 225 million searches over two years. We envision such large-scale studies and the real-time nature of this type of tool to enhance traditional measures of employment and help ease transitions as local and world economies change.

Going forward, the research team is exploring insights that search query data can bring to related macroeconomic phenomena, including the types of skills people look to develop in different geographic regions and where and why people look to move.

The post Exploring job search trends in Canada with search query data: A collaboration with Bank of Canada appeared first on Microsoft Research.

Can the study of sleep help create better AI models?

Shopping As A Service