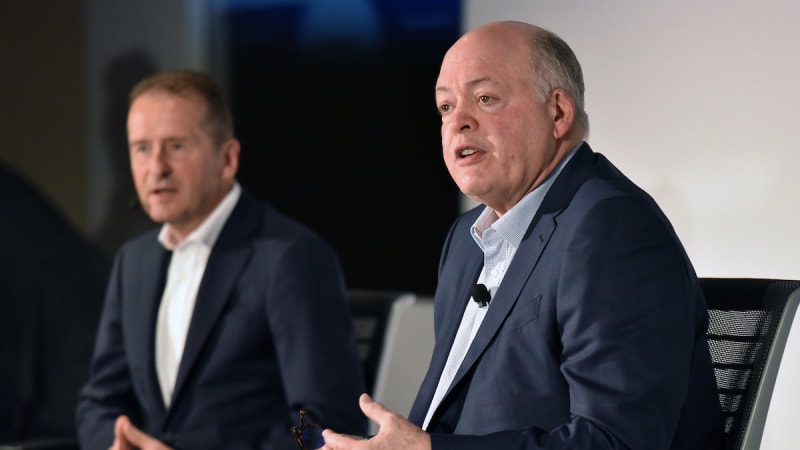 While General Motors appears to be pulling in the reins on its autonomous vehicle program as the coronavirus shutdown drags on, Ford and Volkswagen are pushing ahead with their plans to collaborate on self-driving and electric vehicles.

Bloomberg reports that the two automakers expect to close their deal to move past an initial partnership on commercial vehicles and midsize pickup trucks, which was first announced at the 2019 Detroit auto show, by the end of the month. The news comes as Cruise, GM’s self-driving subsidiary, said Thursday it was laying off 8% of its staff, including at an engineering team in Pasadena, Calfornia, that works on Lidar technology.

With production still on pause across most of North America and unemployment soaring, automakers are preparing to restart production in what is almost certain to be a weakened market. Forecasting firm IHS recently said it expects the U.S. auto market will take the biggest hit from the coronavirus pandemic, lowering its 2020 forecast for light vehicle sales to 12.5 million units, a 26.6% drop, and 22% lower vehicle sales globally, according to Reuters. As a result, many automakers have looked for ways to slow the cash burn by pulling back on spending.

Many companies have delayed product or production launches, including Ford’s Lincoln division, which recently canceled its plans to develop an electric vehicle with Rivian based on the latter’s skateboard platform. Rivian itself has delayed the launch of production of its own first two models because of the COVID-19 outbreak.

Autonomous vehicles, which still face steep regulatory, technological and consumer-acceptance hurdles, seem an obvious target for cutbacks. VW reportedly remains on track to invest about $2.6 billion in Argo AI, the self-driving vehicle technology startup, while Ford has delayed its plan to roll out fleets of self-driving robotaxis and autonomous delivery pods in the U.S. by a year to 2022.

Yet ironically, the economic pressures may actually quicken the development of electric vehicles, despite the high cost. Bloomberg quotes a PwC auto analyst who said the industry will be forced to consolidate the number of powertrains they focus on developing, because automakers can’t afford to have multiple options going on at one time. Ford is still planning on developing a high-volume electric vehicle for Europe in 2023 using Volkswagen’s MEB platform, with a target of 600,000 units using the EV platform over six years.