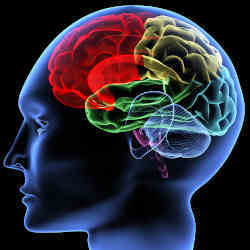 
Your brain’s age may not be the same as the number of years you have lived. Just as some people’s hair turns grey earlier than others, one’s brain can age at different rates, due to genetic and environmental factors, for example.

Many health conditions are linked to aging, so having an older-looking brain could be a red flag. In one study of older adults, advancing brain age was associated with poorer lung function, slower walking, and an early death; other research has shown a link to a greater risk of dementia and Alzheimer’s disease.

”A lot of the work today is looking at associating [a difference between brain age and actual age] with clinical and cognitive outcomes,” says Rory Boyle, a Ph.D. student at Trinity College Dublin in Ireland.

If accurate predictions can be made, brain age could be used as an initial screening tool that would be followed up with more-specific tests.

This is a relatively new field that emerged about 10 years ago, as large datasets of brain scans across a wide age range became available. Machine learning algorithms played a key role in making sense of this data. “The availability of machine learning techniques has helped improve the accuracy of [predicted brain age] quite a lot, since they are well-designed for finding patterns in large datasets,” says James Cole, associate professor of neuroimage analysis at University College London (UCL) in the U.K.

Deep learning in particular holds promise for predict brain age. With other machine learning techniques, the process is time-consuming; MRI images need to be analyzed or otherwise prepared by humans first, for example by adding labels or highlighting parts of an image that are most informative. Deep learning algorithms are able to learn relevant patterns on their own, so “you can just put in the raw data and you get predictions out,” says Cole.

In one study, Cole and his colleagues tested how accurately a deep learning convolutional neural network (CNN) could predict brain age. They trained a model using a publicly available dataset containing more than 2,000 MRI scans from healthy adults between 18 and 90 years old. The model’s performance with raw images was compared to results when the images were pre-processed to highlight certain relevant features; the researchers also compared deep learning predictions with results obtained from a machine learning model called Gaussian Processes Regression (GPR) that was trained using the same images.

The team found that both methods were similar in accuracy when tested on previously unseen images from the same dataset, demonstrating that deep learning can generate accurate predictions without needing to hand-engineer data first. “You could just use raw images that come straight out of the scanner and get a prediction that’s basically as good as if you spent time processing the images,” says Cole.

Using those models, the team also tried to predict the brain ages of twins, using a small dataset containing 62 MRI scans of identical and non-identical female twins, to gauge whether there could be a genetic component to brain age by seeing whether brain age was more similar in identical twins compared to non-identical twins. Cole and his colleagues found that brain age does seem to be inheritable, since the brains of identical twins seemed to age at a more similar rate. Says Cole, “It suggests that there are some genetic factors that are associated with brain ageing and motivates the search for specific genes that might influence that.”

Applying brain-age models to new datasets does not always generate accurate predictions, though. Models often perform well when tested on a subset of data from the training dataset which they haven’t seen before, but when applied to an independent dataset, predictions can be confounded by MRI images captured under different conditions. “The type of MRI scanner used and the quality of the data often has a big impact on the performance of the model,” says Cole. “This is obviously not very desirable, because it’s got nothing to do with how healthy that person’s brain is.”

In recent work, Rory Boyle of the Trinity College Institute of Neuroscience of Ireland’s Trinity College Dublin investigated this problem with colleagues from that institution, Italy’s University of Calabria, Turkey’s Dokuz Eylul University, and New York’s Columbia University by developing a brain-age model that was applied to three independent datasets. They used a simple machine learning model called Elastic Net that is often used with brain images since it can handle their complexity which they trained on 1,359 MRI scans of healthy adults to learn the relationship between a person’s actual age and their grey matter density, which is known to decrease with age.

The learned relationship was then applied to three other datasets of MRI scans to see if it could predict brain age.  The team found that it gave reasonably accurate predictions for all three sets of data. “It shows that it’s a robust model that can be applied to any dataset,” says Boyle. “More complicated machine learning models will get greater accuracy, but our model will produce fairly accurate predictions across datasets.”

Boyle and his colleagues also investigated how different cognitive functions, such as verbal fluency, were related to differences between brain age and actual age, or what they call the brain age gap. Since measures of these abilities were included in the datasets they used, they could compare them to predicted brain age differences. They found that brains that were aging faster were linked to worsening cognitive functions, as expected.

However, a better understanding of how brain age relates to different conditions is still needed. Cole and his colleagues recently looked at how an older-looking brain affects the progression of multiple sclerosis, a disease that affects the brain and spinal cord and can lead to physical disabilities. They now are investigating whether aging is constant over the whole brain, or whether some areas can appear to be older than others in the same person. “We’re trying to come up with a model of brain age that makes predictions at a more local level,” says Cole.

Eventually, brain age predictions could be used in clinical settings. Currently, patients are often presented with scores from MRI scans that can be hard to interpret, but being told that their brain looks five or 10 years older than it should, for example, could be more impactful.

“People have a good intuitive understanding of what it means to be told that their brain looks older than expected for their age,” says Cole. “We hope that that kind of information will help people take lifestyle interventions on board, such as changing their diet or smoking less.”

Sandrine Ceurstemont is a freelance science writer based in London, U.K.

Technology Fridays: Why Bonsai Brings is a Great Addition to Microsoft’s AI Stack