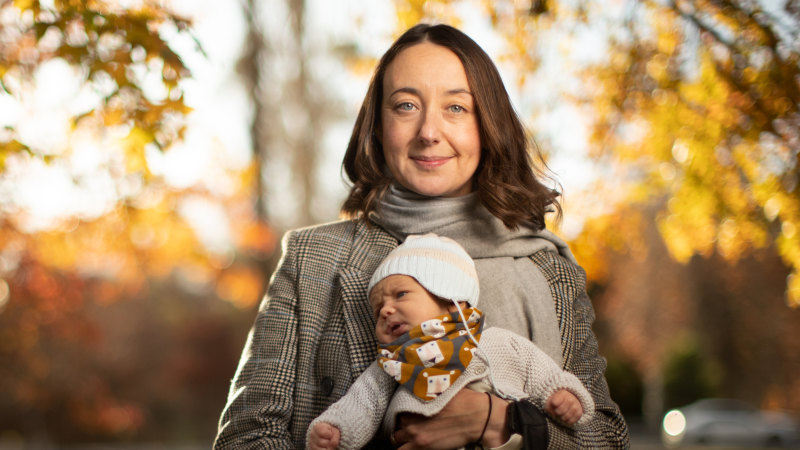 “It is amazing to think one day we will be able to show those photos to him,” said Ms Amey.

As part of the international study, led by national fertility provider Virtus Health, 1000 patients will be recruited at five IVF clinics across Australia, alongside sites in Ireland and Denmark.

During each IVF cycle, embryos will be grown in an incubator fitted with time-lapse cameras to assess the embryo during the five-day incubation period.

Two dimensional or microscope images of embryos will be captured every 10 minutes. A high-tech pre-screening machine, called Ivy, will then analyse these images and rank the embryos according to predicted fetal heart rate outcomes based solely on studying embryonic development.

The embryo ranking system was built by training the artificial intelligence using thousands of images where it was known whether the pregnancy was successful or not.

“Cells move and change in very weird ways during the five days the embryo is in an incubator and it’s completely beyond any human to work out what all that means,” Associate Professor Peter Illingworth, medical director at IVF Australia, who is leading the trial, said.

“What the AI tool can do is analyse all the embryos. The embryo with the highest score can then be selected for transfer by the embryologist with the aim of accelerating the chance to a successful pregnancy.”

Associate Professor Illingworth said the purpose of the study was to determine whether the technology can shorten the time it takes a woman to fall pregnant, ultimately saving aspiring parents thousands of dollars in fertility treatment.

“It’s a very promising tool, but does it really help women, that’s the question,” he said.

Ms Amey and her husband Matthew O’Callaghan, 42, conceived their daughter Grace in 2018, through IVF following two cycles at Melbourne IVF. The couple from Mount Macedon, north-west of Melbourne, dreamt of giving Grace a sibling.

“It wasn’t something we went into blindly because obviously we had read the statistics,” Ms Amey, 39, said. “Our ages meant the odds were already against us.”

To boost their chances of a second baby, three embryos were selected using artificial intelligence. Rory was conceived through the second embryo transfer.

“We were blown away when we got pregnant again,” Ms Amey said.

“It was quite different with Rory. For us, fertility was such an unknown. But having a greater understanding of where we were at in the process at every step and knowing what grade the embryos were and the likelihood they would take gave us so much more certainty.”

Half the women in the trial will undergo traditional embryo selection by an embryologist, the other half will have their embryos chosen using artificial intelligence at no extra cost.

Cells move and change in very weird ways during the five days the embryo is in an incubator and it’s completely beyond any human to work out what all that means.

The results of each group will be compared to determine the effectiveness of using the technology.

An analysis of more than 10,000 embryos published in the Human Reproduction Journal last year found the technology had a 93 per cent success rate in determining whether an embryo will progress to a fetal heartbeat.

Thousands of would-be parents were pushed into limbo in March when IVF procedures were prohibited due to the coronavirus crisis. The ban was lifted on April 21.

Australian IVF pioneer Robert Norman praised the trial as a way to test the validity of artificial intelligence, arguing that expensive “add-on” treatments are often sold to boost a woman’s chances of conceiving without clear evidence they work.

“It’s quite logical that in next five to 10 years that machines are going to choose the embryos,” Professor Norman said. “The question is do we have the best algorithms and mathematical formulas to choose at the moment? A good embryologist may still be much better than a machine.”

He cautioned there were also limitations to using artificial intelligence.

“The one thing that artificial intelligence doesn’t do yet is tell you what the genetics of the embryo are,” Professor Norman said. “You can get a very beautiful looking embryo, which has got too many or too few crevices and that might form Down syndrome or might have zero chance of going anywhere.”

The results of the 12-month trial, which has already started in Brisbane, Sydney and Melbourne, are expected next year.

How to Use Quantile Transforms for Machine Learning