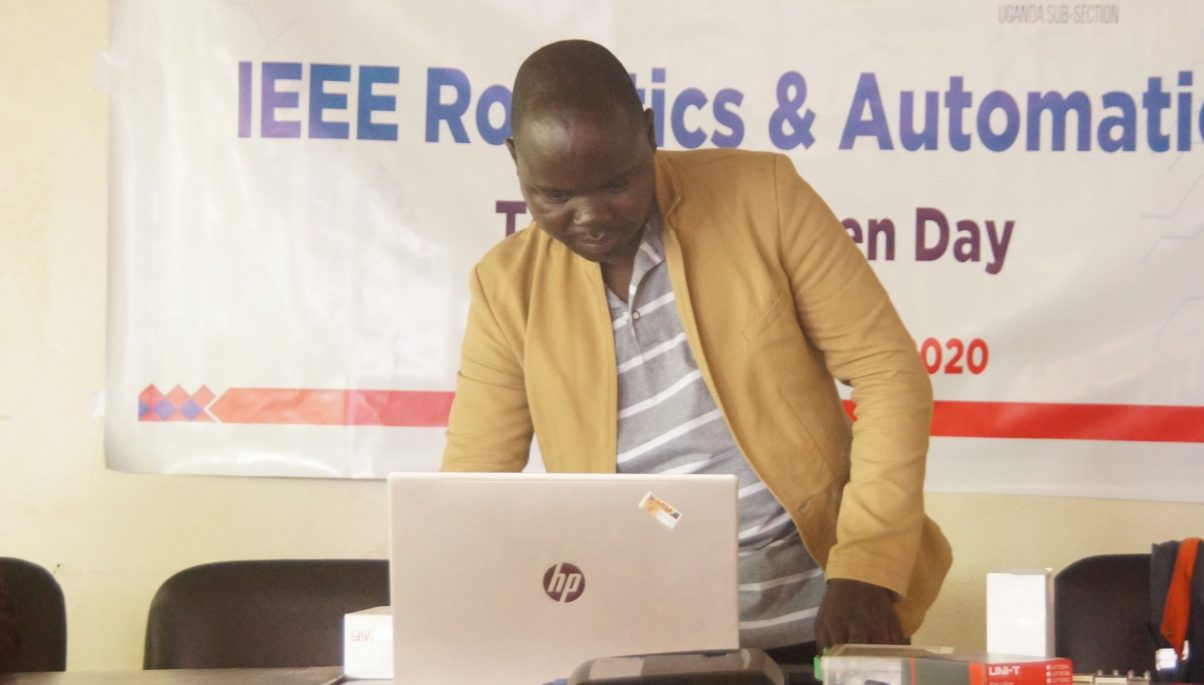 Born in 1986 in Arua the present day Terego district, Baron Ezabo hails from a humble background and never imagined becoming an innovator.

He is developing the world’s first Artificial Intelligence powered virtual trade City, the first of its kind online.

Ezabo shares his life story with Chimpreports on how he ended up becoming an innovator and Chairman of the Institute of Electrical and Electronics Engineers (IEEE), Uganda section.

IEEE is the world’s largest professional body for electrical and electronics computing engineers.

“I was born deep in Terego where naturally everything is about farming. You wake up in the morning, you farm and in the evening you go to trading centers for cheap disco, if you are a drunkard you go for alcohol, if you are a womanizer you go and look for village girls,” he narrates.

His father worked with Uganda Airlines and after its collapse, he moved to National Medical Stores (NMS) and later joined Entebbe hospital Grade A as a laboratory technician after his contract with NMS expired.

Unfortunately, he married a second wife and divorced Ezabo’s mother when he was only 3 years old.

“Most of my time I grew up with relatives and not my parents. Life wasn’t easy because I had to look for ways of surviving,” he says.

Ezabo had never heard about technology until 2004 at the age of 18.

He says in 2004 he got concerned and decided to abandon village life and follow his father in Entebbe but life in Entebbe was not as good as he expected because of the poor payment his father was getting.

Fortunately, his uncles were much better than his father financially; one of them was a lead engineer at Nile Breweries, another one was a senior doctor at Mulago hospital, the third was a Commissioner in the Ministry of Health while the fourth was an accountant at Entebbe hospitals both Grade A and B.

“They had money but they all had their family problems and all that,” says Ezabo.

In 2006, he joined Entebbe Secondary School in senior one and as the oldest student in class, fellow students routinely made fun of him. That never bothered him.

In the same year of 2006, when Bill Gates visited Zambia, Ezabo says he read about how Bill Gates reaped wealth from software (Microsoft). Coincidentally, his cousin had gotten a first computer from his friend in the UK (United Kingdom).

Having been in far much better school than his, he was used to computers and Ezabo had to learn how to use a computer using his cousin’s device.

“They forced me to use a computer, I was scared. I used to just see them play games. So I was forced by one of my cousins. He said, ‘every day you come to our room to watch us play games and you don’t touch anything. You either touch this computer or never come in our room again. He was very serious.’”

“The first time I tried to do it in his absence, I messed up and they came and detected and warned me. I became scared,” he recalls.

However, one of his cousins began training him in computing.

“I had read about Bill Gates and my dream was to become a software developer and a software engineer.”

This made him an expert in computing as many brought him their computer devices for repairing.

In 2012, he got a job as a system administrator with an Italian restaurant in Entebbe which had a fantastic ICT facility. He acquired much knowledge and experience from MTN engineers who were often called to fix software problems in the facility.

“I ended up mastering how things are done.”

In 2013, he became a member of IEEE (Institute of Electrical and Electronics Engineers) the largest professional body in the world.

Ezabo even serviced the computers for American soldiers who had come to Uganda to train marine forces.

When he joined IEEE, he was invited for an information meeting at Makerere University where he competed with three professors and was elected the first IEEE Secretary in Uganda.

He got various capacity trainings in Kenya, Rwanda until the time he was selected to be trained in the United States.

“As per now, if it was not because of Coronavirus, I would be in Shenzhen (China).”

He holds a certificate of electronics technology from Nakawa Vocational Training College.

This year, he was elected Chairman IEEE Uganda section.

Discussing his current project and its future prospects, he said, “I am moving to more advanced Artificial Intelligence. I am already there because of the Woxsan City project I am doing which is one of the top Artificial Intelligences in the country. I have a possibility of innovating in computer vision or astronomy because I have access to astronomers.”

The virtual city (Woxsan City) he is building, he says, is equivalent of Singapore but entirely online.”

“Woxsan City is the world’s first Artificial Intelligence powered City. It will have online banking, online shopping malls (malls where it has integration of e – commerce and interaction between the traders and buyers), virtual offices, a virtual Airport, online hospitals, online universities, virtual reality among others,” he said.

Government has already picked interest in what he does and last week on Tuesday he had a meeting with Assistant Commissioner ICT, innovations, research and development in the Ministry of ICT and National Guidance.

He however says that Government has come in slowly adding that even if it doesn’t give him any support, he already has International networks.

“I have to move out of the country. I am going to Advance Artificial Intelligence because of the project I am doing of Woxsan City,” he told Chimpreports.