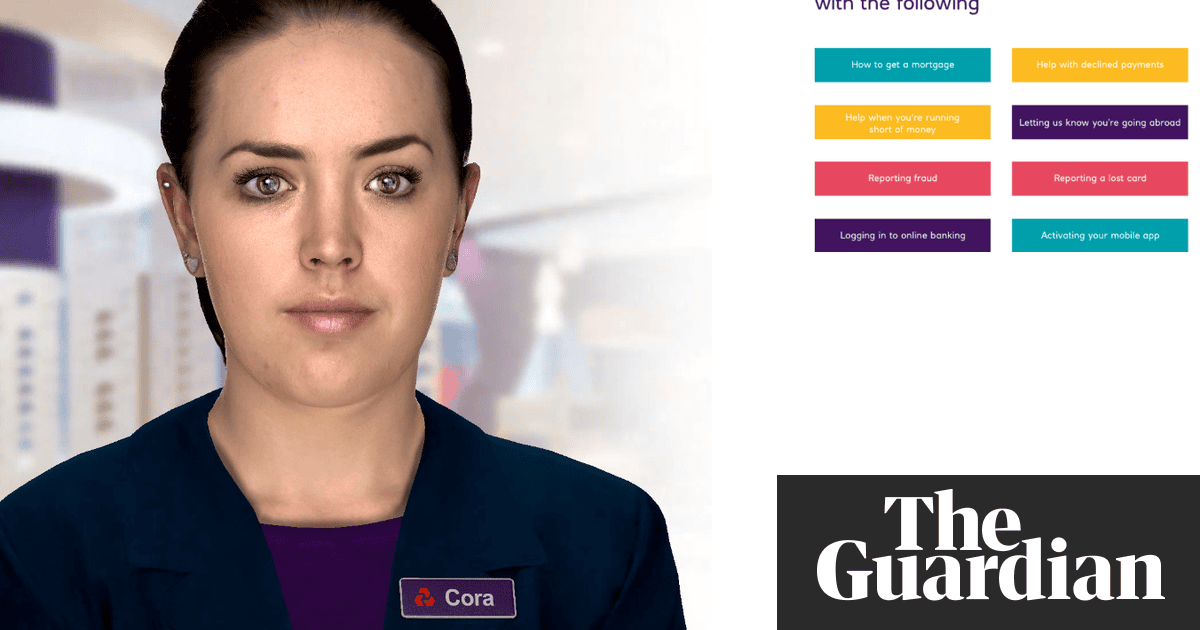 NatWest is testing an artificial intelligence-powered “digital human” called Cora that will converse with customers in branches – raising fears that bank tellers could be replaced by avatars.

Cora, described by the bank as “highly lifelike”, is the result of a link-up with a New Zealand tech company whose co-founder was involved with creating digital characters in the blockbuster films Avatar, King Kong and Spider-Man 2.

Cora is currently able to answer basic verbal questions such as “How do I login to online banking?”, “How do I apply for a mortgage?” and “What do I do if I lose my card?”. NatWest said it could help cut down on waiting times because it would be able to deal with simple problems, adding that Cora’s AI skills would eventually expand to answering hundreds of different questions, even detecting human emotions and reacting verbally and physically with facial expressions.

The bank implied that a digital human could improve on the real thing by “providing consistent, accurate answers all the time in a way that humans can’t always do”.

While some will be excited by the news that the “AI revolution” is coming to the UK’s high streets, others will fear that the 71% taxpayer-owned bank is investing in this technology in order to replace branches or staff. It is not clear what the bank’s army of counter staff think about the possibility of hi-tech robo-bankers taking their jobs.

In December Natwest’s parent group RBS announced that 197 NatWest branches and 62 RBS outlets would close, putting nearly 700 jobs at risk and sparking warnings about the end of high street banking.

But NatWest insisted Cora is not part of a plot to axe members of staff and that it would complement, not replace, branch, phone and online services.

Cora has already been tested in one of the bank’s Liverpool branches and, earlier this week, one of its Newcastle outlets. “She” is still in the pilot phase, but the bank would like to see the technology rolled out in some form during 2018. As well as being put in branches, Cora could be used by customers at home on their laptop or PC and, in the long run, on smartphones.

For about a year now, the bank has deployed a text-based chatbot, also called Cora, which customers can use on NatWest’s online help pages and that can answer more than 200 basic banking queries. However, a spokesman said that by drawing on advances in artificial intelligence, computing power, neuroscience and psychology, a new Cora prototype had been built. “It could serve as an additional way for customers to get help, on top of the usual branch, telephone and online services, and in the long run could answer hundreds of everyday banking questions.”

The technology comes from New Zealand-based firm Soul Machines, which uses biologically inspired models of the human brain and neural networks to create a “virtual nervous system” for its digital humans that can detect human emotion and react verbally as well as physically through facial expressions.

NatWest said that, like a real person, the digital human is trained to deal with new subject matter, “and when she makes mistakes, she learns, so that over time the interactions become more and more accurate”.

While the bank indicated it would deploy the technology only if it successfully completed the pilot, Cora – which is modelled on an engineer at Soul Machines – could be used to help free up time for human advisers to answer more complex queries. She could also be used outside normal working hours and days.

“Testing to date has suggested customers that have avoided digital services in the past may be more inclined to interact with digital humans like Cora, and it could help blind and partially sighted customers who are unable to engage with visual content,” the spokesman said.

The paradox on robocar accidents