Having experience in deep learning doesn’t hurt when it comes to the often mysterious, time- and cost-consuming process of hunting down an appropriate neural architecture. But truth be told, no one really knows what works the best on a new dataset and task. Relying on well-known, top-performing networks provides few guarantees in a space where your dataset can look very different from anything those proven networks have encountered before. For example, a network that worked well on satellite images won’t necessarily work well on the selfies and food photos making the rounds on social media. Even when a task dataset is similar to other common datasets and a bit of prior knowledge can be utilized by starting with similar architectures, it’s challenging to find architectures that satisfy not only accuracy, but also memory and latency constraints, among others, at serving time. These challenges could lead to a frustrating amount of trial and error.

In our paper “Efficient Forward Architecture Search,” which is being presented at the 33rd Conference on Neural Information Processing Systems (NeurIPS), we introduce Petridish, a neural architecture search algorithm that opportunistically adds new layers determined to be beneficial to a parent model, resulting in a gallery of models capable of satisfying a variety of constraints for researchers and engineers to choose from. The team behind the ongoing work is comprised of myself, Carnegie Mellon University PhD graduate Hanzhang Hu, and John Langford, Partner Research Manager; Rich Caruana, Senior Principal Researcher; Shital Shah, Principal Research Software Engineer; Saurajit Mukherjee, Principal Engineering Manager; and Eric Horvitz, Technical Fellow and Director, Microsoft Research AI.

With Petridish, we seek to increase efficiency and speed in finding suitable neural architectures, making the process easier for those in the field, as well as those without expertise interested in machine learning solutions.

The machine learning subfield of neural architecture search (NAS) aims to take the guesswork out of people’s hands and let algorithms search for good architectures. While NAS experienced a resurgence in 2016 and has become a very popular topic (see the AutoML Freiburg-Hannover website for a continuously updated compilation of published papers), the earliest papers on the topic date back to NeurIPS 1988 and NeurIPS 1989. Most of the well-known NAS algorithms today, such as Efficient Neural Architecture Search (ENAS), Differentiable Architecture Search (DARTS), and ProxylessNAS, are examples of backward search. During backward search, smaller networks are sampled from a supergraph, a large architecture containing multiple subarchitectures. A limitation of backward search algorithms is that human domain knowledge is needed to create a supergraph in the first place. In contrast, Petridish is an example of forward search, a paradigm first introduced 30 years ago by Scott Fahlman and Christian Lebiere of Carnegie Mellon University in that 1989 NAS NeurIPS paper. Forward search requires far less human knowledge when it comes to search space design.

Petridish, which was also inspired by gradient boosting, creates as its search output a gallery of models to choose from, incorporates stop-forward and stop-gradient layers in more efficiently identifying beneficial candidates for building that gallery, and uses asynchronous training. 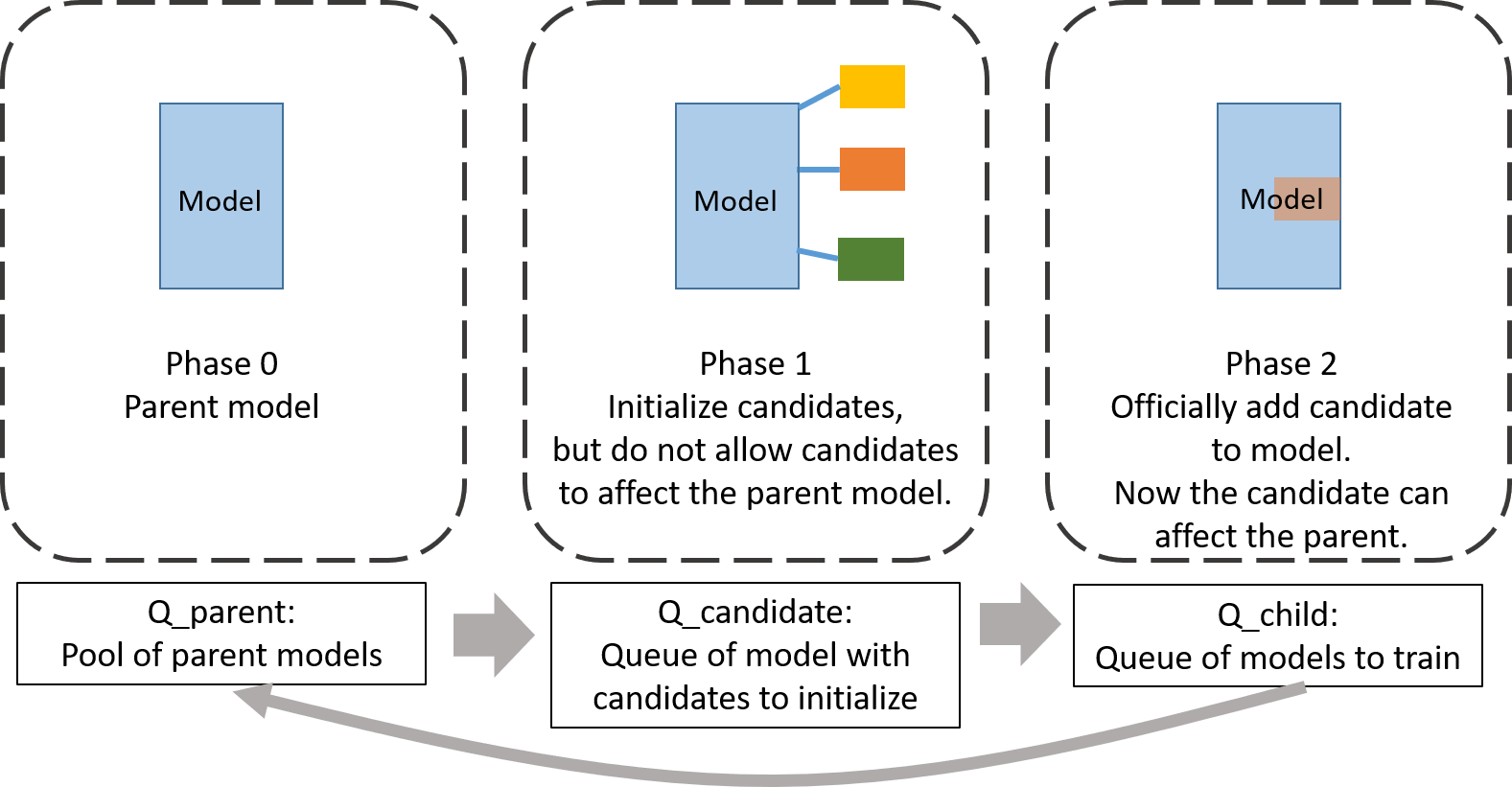 Figure 1: Petridish, a neural architecture search algorithm that grows a nominal seed model during search by opportunistically adding layers as needed, comprises three phases. Phase 0 starts with the small parent model. In Phase 1, a large number of candidates is considered for addition to the parent. If a candidate is promising, then it’s added to the parent in Phase 2. Models in Phase 2 that lie near the boundary of the current estimate of the Pareto frontier (see Figure 2) are then added to the pool of parent models in Phase 0 so they have the chance to grow further.

There are three main phases to Petridish:

Explicitly maintaining a Pareto frontier, like the one represented by Figure 2, allows researchers, engineers, and product groups to more easily determine the architecture that achieves the best combination of properties they’re considering for a particular task. With Figure 2, for example, they can more easily answer questions such as what is the best-performing architecture available given a certain amount of floating-point operations per second (FLOPS) at serving time. This is crucial in production environments, where accuracy, FLOPS, and other metrics like serving latency, memory, and cost are important considerations. Once a search has been completed, if the need for a model meeting different constraints arises, all the team has to do is look it up on the plot without having to redo the architecture hunt.

All three phases are executing concurrently in a distributed manner with each phase maintaining its own queue of models where each queue is cleared by a pool of worker processes in parallel.

Figure 2: Petridish maintains an estimate of the Pareto frontier and makes it easier to see the tradeoff between accuracy, FLOPS, memory, latency, and other criteria. Those models along the Pareto frontier (red line) make up the search output, a gallery of models from which researchers and engineers can choose.

In Phase 1, for a candidate to be selected for incorporation into the model, we apply L1 regularization to all the candidates and greedily select the candidates that have the highest weight. L1 regularization is commonly used in feature selection to induce sparsity over a set of features so that one can effectively get the most predictive power out of the least number of additional features. Petridish should remind some readers of gradient boosted machines (GBMs), where additional capacity is sequentially added—for example, in a gradient boosted forest—to minimize residual loss.

The construction of Petridish makes it particularly amenable to warm-starting from a previously known model, which is important, as datasets continually change in size and character, a common occurrence in production environments.

While we’ve demonstrated Petridish on CIFAR-10/100, ImageNet and also Penn Treebank, which are commonly accepted NAS datasets, we’re trying it out on a number of diverse datasets in vision and language and invite the community to do the same and report back their experiences. All source code for Petridish is openly available (under MIT license) using TensorFlow 1.12. We’re writing a more robust distributed version in PyTorch, which will appear shortly at the same repository.

The personal web: Connecting information for better search and recommendation