In February, the Kansas City Star ran a widely circulated hit piece on America First Students, a new student organization at Kansas State University. The smear campaign was  based on research by the Institute for Education and Research on Human Rights (IREHR). Despite being a little-known and little-funded organization, IREHR regularly publishes large volumes of research and has even created a “bigotry” tracking app that promises to use artificial intelligence (AI) and machine learning to out “known white nationalists.”

Founded in 1983, IREHR’s vision, according to its founder Leonard Zeskind, is to fight against what it sees as white nationalism. Zeskind claims that white nationalism is in a “symbiotic relationship” with mainstream conservatism, such as the Christian right and paleoconservativism. In 2011, Zeskind wrote about IREHR’s “Re-Birth” in the Huffington Post, explicitly attacking the Tea Party movement for its “racism” in his second sentence. “Tea Party Nationalism” even has its own section on the IREHR website, right under “Race, Racism & White Nationalism.” In 2018, years after the Tea Party movement was at its peak, IREHR ran a piece titled “Guns and Racism: From the National Rifle Association to Far Right Militias and the Tea Party.” The Tea Party movement is such a target of IREHR’s ire that Zeskind, along with IREHR president Devin Burghart, wrote a report called “Tea Party Nationalism,” commissioned by the NAACP. The NAACP also created a companion website: TeaPartyNationalism.com.

In addition to going after the Tea Party movement and the National Rifle Association, IREHR also targets the American Conservative Union’s Political Action Conference (CPAC). In 2014, Burghart published “The Unbearable Whiteness of CPAC.”

Given how IREHR sees white nationalism throughout mainstream conservatism and considers “whiteness” as something “unbearable,” its phone application that promises to identify “known white nationalists” via artificial intelligence sounds incredibly Orwellian.

Burghart announced the creation of IREHR’s anti-bigotry app during a Holocaust Remembrance Day Speech in May 2019. The app is named after Leopold Trepper, the head of a Soviet anti-Nazi spy ring during WWII known as the Red Orchestra. Trepper was later imprisoned by Stalin, reportedly because Trepper—himself Jewish—“surrounded himself with Jews.” (This detail was not included in IREHR’s speech on Holocaust Remembrance Day; however, IREHR’s founder and president still generally appreciates communist figures, even visiting the grave of Marxist philosopher Antonio Gramsci.)

Trepper: The Anti-Bigotry App promises to provide “instant updates about new threats near you.” According to the IREHR website, the app will allow users to receive push notifications of seemingly white nationalist activity, and it allows users to upload their own events, photos, and videos to the app.

Downloading Trepper, users are greeted with a page telling them what they can find on the app: a news tab, a “Tools for Response and Resistance” tab, and a way to “Report incidents” (see the screenshot below).

The Report Bigotry tab allows users to request help (a feature coming soon), record video of an ongoing live event, or write a report about an instance of bigotry they witnessed.

The reporting feature lets users provide details about a reportedly bigotry-related event, ranging from murder, the first item on the list, to something “internet-based” or “other.” 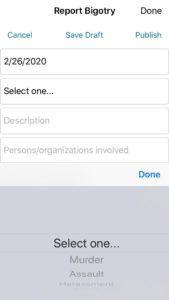 Much of the app is still under construction. The “signs and symbols of bigotry” section of the response toolkit is “coming soon” as is the “help, FAQ, tips, etc.” section. The section for users to find or create their own “anti-bigotry” groups loads a blank page. As of writing, the only video uploaded to the Trepper app is a video of a Patriot Prayer rally from 2018. Patriot Prayer is a Portland-based group that has been maligned by the Southern Poverty Law Center (SPLC) and targeted by Antifa activists.

Curiously, Patriot Prayer is included on the Trepper app even though its controversial founder, Joey Gibson, identifies as Japanese, not Caucasian, and has repeatedly condemned white supremacy. Apparently, to the IREHR app, a person doesn’t even need to be white to be a white nationalist. 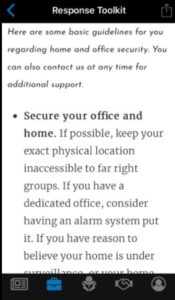 The app also tells users involved in their “anti-racist” activity to shred documents, handle potential hate mail with tongs, and circulate pictures online of people they suspect to be following them.

A section of the IREHR app is devoted to learning more about IREHR, with the option to donate to IREHR. According to tax filings, the organization has not had gross receipts of more than $50,000 since 2008. It is unclear how such a small organization with so little funding can create such a complicated app—with the potential of harnessing facial recognition technology.

Garbage In, Garbage Out